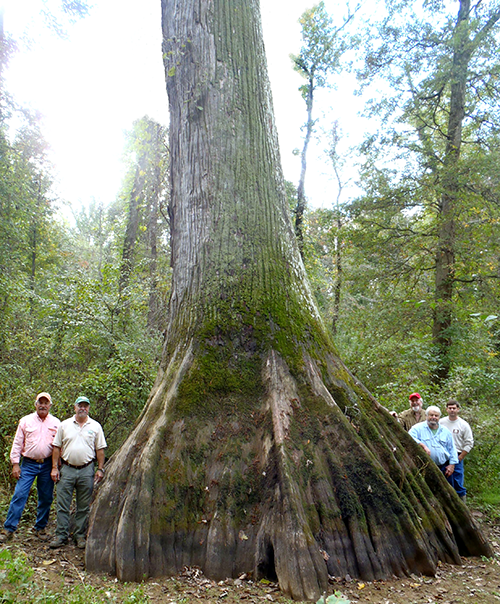 This group traveled deep into the swamps of the Hatchie River Bottom northeast of Stanton recently to measure and document perhaps the largest living thing in the state.

The giant bald cypress is estimated to be 800 years old. The circumference of the trunk, measured at chest-high above the ground, is 42 feet 10 inches. It stands 130 feet 6 inches tall, and the widest limb spread is 63 feet. 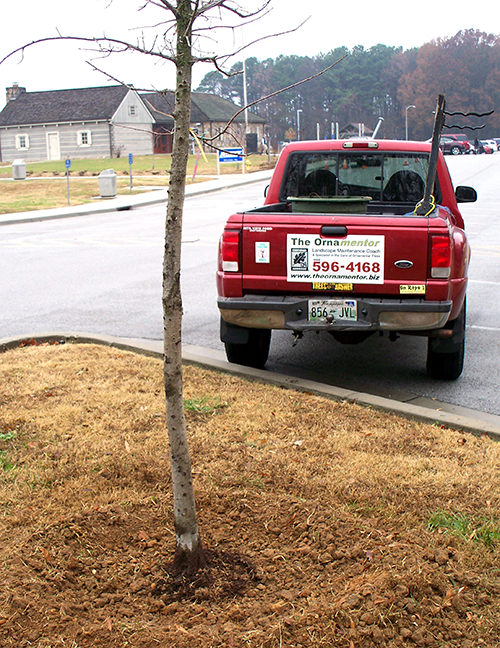 TUFC member Jon Nessle planted a nuttall oak, three redbuds, and 40 iris bulbs at the Welcome Center in Chattanooga to complete the Council's participation in the TDOT Tennessee Groves project.

Tennessee tree board workshop is February 6

Fifteen cities have already signed up for TUFC's workshop for tree board members February 6 in Cookeville.

The workshop is for all Tree Board chairs plus one other representative from each Tree City USA in Tennessee. Tentative topics will be urban forestry planning, Tree Board and Government 101, the role of Tennessee Urban Forestry Council and its programs, and federal government perspectives, followed by breakout sessions in the afternoon.

This workshop is covered by a grant from the Tennessee Division of Forestry, Urban and Community Forestry Program and will provide lodging, meals, and handout material.

The Council is having the workshop one day prior to its annual retreat so that workshop participants can stay over to help the Council plan its annual activities. Register

Persian ironwood is SMA
Urban Tree of the Year

Society of Municipal Arborists have named the Persian ironwood tree 2014 Urban Tree of the Year. Parrotia persica is native to northern Iran, and it has been planted widely in cities across Europe and North America for many years. Fall color is spectacular, often with leaves of multiple colors on the tree at the same time: orange, purple, yellow and green. This tree has proven to be incredibly resilient to drought stress and pests. More

The webinar series offers insights into the political process, how to communicate your message, forest management opportunities, and engaging volunteers.

A total of 14 gypsy moths were trapped by 7,335 traps across the state. The majority of moths were caught in high-risk areas. More

UT small fruit/tree fruit specialist David Lockwood says buds and woody tissue of many fruit crops in Tennessee may have suffered significant cold injury as a result of the severe freeze events January 5–7.

Some damage may show up fairly soon but it may be necessary to wait several weeks or more before we can have an accurate picture of things, he says. More

The Council continued moving forward in 2013 with a great conference and achievements in its arboreta program. Administrative challenges remain but improvements continue to be made by our Administrative Assistant, Jill Smith.

Arboreta – Recognition of new sites across the State as Certified Arboreta continues to expand and interest in recertification of existing sites is growing. The challenges of certifying new and existing sites include vandalism of labels and their cost of replacement, and arranging volunteers for conducting site inspection visits.

The Council now recognizes over 80 sites across the state, and includes school grounds, parks, commercial grounds, and other places where the public can learn how to identify trees by viewing trees that are labeled with scientific and common name.  An additional 5 sites have applications submitted or are pending certification.

A new category of corporate arboreta was added in 2013 and two sites were recognized: Graceland of Memphis and Milky Way Farms near Pulaski.

Center of Excellence, Memphis – Memphis Botanic Garden completed numerous activities, including several training classes on tree identification, tree health, and classes on trees for 4-H and Cub Scout groups. Staff continued their commitment to plant 2 trees for every one affected by construction, and hosted a tree information booth at their fall plant sale.

Landmark and Historic Trees – The Landmark and Historic (and Heritage) Tree program recognized 4 new trees in 2013. Three of the trees were Moon trees, which were trees grown from seeds that had flown around the moon during the Apollo 14 mission in 1971. These trees are currently located at University of the South, Sewanee, University of Tennessee Experiment Station and Arboretum, Oak Ridge, and Sycamore Shoals State Park, Elizabethton. The fourth tree is a witness to the Civil War Battle of Nashville located on the grounds of the Richland Country Club, Nashville.

22nd Annual Urban Forestry Conference and 14th Tree Climb – The conference and tree climb were outstanding in 2013. Jackson did a great job of hosting and put together a great tour. There was excellent interaction at the tree board breakfast. Attendance was up for 2013 and the knowledge gained from the workshops and conference sessions was appropriate for professionals and tree board members.

There was no Tree Board of the Year award for 2013, so the State Urban Forester announced at conference that Memphis will host the State Arbor Day Celebration for 2014.

Notable Trees Exhibit – The Exhibit continued making rounds across the state with stops at the Ijams Nature Center in Knoxville and the Ned R. McWherter Cultural Arts Center in Jackson.

Chapters
West Tennessee/Memphis. The Chapter accomplished two highlight activities in 2013. Members helped get the Memphis tree ordinance passed that was a roadblock to Memphis becoming a Tree City USA, and hosted a Master Urban Forestry class that was completed by 9 people. Additionally, the Chapter was present at several mid-South events with their chapter booth, distributing educational materials. Locations included Big Cypress Tree State Park in Weakley County and Ames Plantation in Hardeman County in addition the Memphis Zoo, Shelby Farms, and others in the greater Memphis area.
Trees Nashville (Middle Tennessee). Trees Nashville partnered with CSX and Alliance for Community trees to plant 100 flowering cherry trees along Nashville streets. Approximately 75 volunteers turned on out to plant the trees, including CSX employees, Hands On Nashville volunteers, and Tennessee State University Students. The trees were purchased by CSX, whose goal is to plant a tree for every mile of track (21,000 miles) in their system.
East Tennessee (Knoxville) – The Chapter has established regular quarterly meetings and continues refine its administrative procedures. It manned a booth at two events, UT’s Ag Day 2013 and the Centennial Conservation Expo 2013 with the Knoxville Tree Board. It also established its presence on the TUFC website.

Administrative Accomplishments and Challenges – The Council’s part-time administrative assistant has worked with the membership committee and made strides in re-vamping the Council’s membership role. Discounts for members are being sought from businesses and tourist venues, with Graceland now giving Council members a discount. Insurances were paid on time and the 990 IRS tax filing was done on time. The Solicitations Filing with the Tennessee Secretary of State’s office remains a challenge; this year it involved having a development director (fund raiser) not being registered with the Secretary of State’s office.

The grant agreement with Tennessee Dept. of Transportation expired in 2013, and significant efforts were made to complete our obligations to TDOT. By year’s end the Welcome Centers on I-65 in Pulaski and I-24 Chattanooga in will be completed. One tree remains to be planted at the Memphis Welcome Center, but this site is still remains under renovation. The Council intends to honor this obligation sometime in the future even though the grant agreement has expired.

It appears all previous issues with PayPal have been resolved, and the Council can now use Square for credit card purchases at conference and other events. Communications between treasurer, accountant, administrative assistant, and others involved with funds and budgets is improving.

As we move forward into 2014, we look forward to strengthening our membership and the continued development of our Chapters, continuing our current programs and developing corporate arboreta program within our statewide arboreta certification program. –Bruce Webster

Eric Bridges is the new president of the West Tennessee chapter of TUFC.