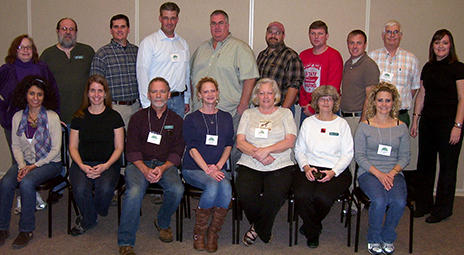 Board members, staff, and Division of Forestry representatives gather at the January retreat. 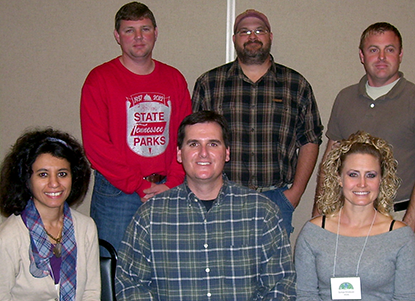 Emerald ash borer, an invasive insect that destroys ash trees, has been confirmed in Jefferson County and in Smith County, the first occurrence in Middle Tennessee.

Jefferson is adjacent to previously quarantined areas, but the Smith County find is some distance away. Four EAB were caught at Cordell Hull Lake in the Elmwood/Granville area.

Jefferson and Smith joined Greene, Campbell, Cocke, Union, Monroe, Anderson, Hamblen, Hancock, Hawkins and Roane under quarantine in 2012. Blount, Claiborne, Grainger, Knox, Loudon, and Sevier were placed under quarantine in 2011. The quarantine prohibits the movement of firewood, ash nursery stock, ash timber and other material that can spread EAB.

Center of Excellence has a busy 2012

Jere Jeter has been named State Forester. Jeter is a long-time Division of Forestry employee and was previously assistant state forester. He started as a field forester in the 1970s, became a staff forester, and then assistant forester in the 1990s.

The Council continued its transition in 2012 from not having an executive director. The Council continued to get a better grasp of the required business functions of a non-profit that were handled by the executive director, including PayPal accounts, solicitations filing, and board insurance. Hopefully these issues have finally been resolved as we transition into 2013.

Arboreta: Recognition of sites across the State as an arboretum continues to expand and interest in the program remains high, creating challenges in meeting the demand. These challenges including getting sites re-certified and in conducting site visits for new and renewing sites.

The Council now recognizes over 70 sites across the state, and includes school grounds, parks, commercial grounds, and other places where the public can learn how to identify trees by viewing trees that are labeled with scientific and common name. An additional 11 sites have applications submitted and are pending certification.

21st Annual Urban Forestry Conference and 13th Tree Climb: The conference and tree climb were again held at the Ellington Agriculture Center in Nashville. Attendance was down for both the conference and in the participants in the tree climb, but the workshop, program, awards luncheon, tree board breakfast was good. The tour on Thursday was excellent in spite of the adventures with the bus (getting stuck and air conditioning breakdown). All of the tree climb events went smoothly and were finished by the end of the day.

Awards of Excellence Winners: The Council recognized the following individuals and organizations from across the state for their contributions to Urban and Community Forestry in Tennessee. They are:

As winner of the Tree Board of the Year award, Knoxville gets to host the State Arbor Day Celebration for 2013.

Chapters: the Council now has 3 chapters, in Memphis/West Tennessee, Trees Nashville (Niddle Tennessee) and East (Knoxville) Tennessee. Among all the Chapter activities, One of the signature events is the Master Urban Forestry class held by the West Tennessee Chapter. This class is patterned after the Extension Service’s Master Gardener classes but with a focus on trees.

As we transition into 2013, we look forward to continuing these programs and strengthening our membership and the support of our Chapters. We also look forward to putting into action a plan for the Council Development Director to implement.